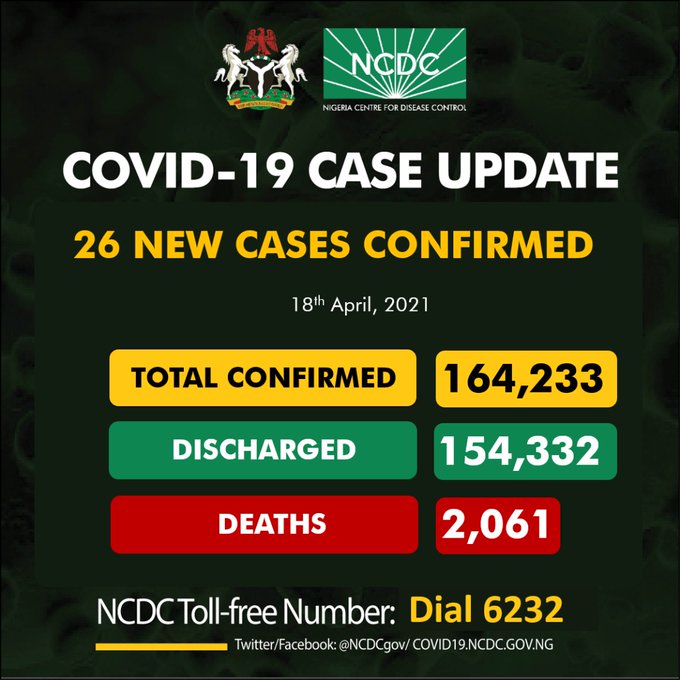 At that time, the disease had just started spreading in a few states with only about 400 infections recorded in the entire country.

Sunday also became the sixth consecutive day that Nigeria recorded no daily fatality from the virus which has caused over 3 million deaths globally and over 2,000 deaths in Nigeria in the past year.

The latest tally brings the total number of infections in the West African nation to 164,233, according to an update published by Nigeria Centre for Disease Control (NCDC) on Sunday night.

While some countries such as Brazil and India are witnessing a resurgence in COVID-19 infections, Nigeria has witnessed a massive reduction in new cases from an overage of over 1,000 daily cases between December 2020 and February 2021, to less than 200 in the past month.

Also, with no new deaths in the past six days, the fatality toll from COVID-19 in Nigeria remains 2,061, according to NCDC’s data.

Only three deaths have been reported from the pneumonia-like disease in Nigeria in the past two weeks, an indication that Africa’s most populous nation has gone past its worst phase, although experts warn it might be too early to celebrate.

There is still low testing for the disease across Nigeria, a situation health experts believe could be masking the severity of the outbreak.

Since the pandemic broke out in Nigeria in February last year, the country has carried out over 1.8 million tests.

The data showed that the country’s active COVID-19 cases increased by 19, bringing the total number of people being treated for the virus to 7,840.

More than 140 million people have been infected with COVID-19 globally leading to over 3 million deaths, according to worldometer.info.

A breakdown of cases by state can be found via https://t.co/zQrpNf5Q61#TakeResponsibility pic.twitter.com/dFxzqw0GtH

Having received 3.94 million doses of the Oxford/AstraZeneca vaccine through the COVAX facility in early March, Nigeria commenced vaccination beginning with healthcare workers and other priority groups.

Nigeria on March 21 received another 300,000 doses of the same vaccine from telecom giant, MTN. On April 6, the government of India also delivered 100,000 doses of vaccine to Nigeria, bringing the total number of vaccines in stock to about 4.4million.

Executive Director of the National Primary Health Care Development Agency (NPHCDA), Faisal Shuaib, on Friday, announced that about 1,071,346 Nigerians considered “eligible” for the first phase of the rollout have been vaccinated six weeks into the process.

Nearly 900 million vaccine doses have been administered worldwide, equaling 11 doses for every 100 people, according to latest figures from research and data provider firm, Our World in Data.

United States is leading in the vaccination race, having inoculated nearly 200 million of its population. It is closely followed by China with over 183 million people vaccinated in the Asian country.

Africa has the lowest vaccination rate of any continent, with many countries yet to start mass vaccination campaigns.