Manchester United kept their place at the top of the Premier League after a 0-0 draw with Liverpool at Anfield on Sunday. 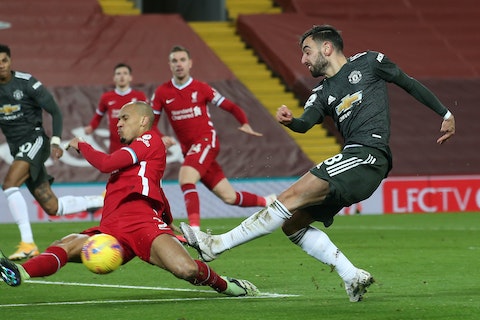 An encounter of few chances saw the Red Devils extend the champions’ scoreless run to three matches, their longest such streak in the top flight since March 2005, in what was Jurgen Klopp’s 200th league game in charge.

Alisson denied Paul Pogba from arguably the best of the opportunities as United’s winless league run against the Reds reached five matches for the first time since 2002.

Still, the result edged them two points clear of Leicester City and ensured Liverpool remain one further back.

It was 14 minutes until either side managed a shot, Roberto Firmino seeing an effort blocked and Andy Robertson drilling the loose ball over.

Liverpool were controlling possession as United looked to exploit the makeshift centre-back pairing of Fabinho and Jordan Henderson on the break, with Robertson doing well to stop Marcus Rashford after a promising move.

Bruno Fernandes whistled a free-kick just wide and Firmino scuffed a shot straight at David de Gea as Liverpool broke forward quickly, that effort proving the only one on target of the first half.

United captain Harry Maguire did well to deny Firmino a clear opening from a Robertson cross and divert a Mohamed Salah effort wide, before Fernandes fired his side’s first shot on target straight at Alisson with 65 minutes played.

Edinson Cavani came off the bench as United sought a little more presence in attack, with Pogba then heading straight at the Liverpool keeper from a Fernandes corner.

Fernandes was thwarted after United’s best move of the match, Alisson sticking out a foot to save after the midfielder turned Luke Shaw’s cross goalwards.

De Gea flung himself to tip Thiago Alcantara’s fierce strike wide before Pogba was foiled by Alisson, the midfielder blasting straight at the Brazil international after Aaron Wan-Bissaka’s pass.