Former African Footballer of the Year in 2008, Emmanuel Sheyi Adebayor was born in Lome, Togo to Nigerian parents. Adebayor exclusively told Complete Sports in Accra, Ghana in 2007 during an interview whilst still a player of Arsenal that he desired to play for the Super Eagles but the presence of other top Nigerian strikers made it impossible for him to have a chance so he opted to play for Togo. He went further to say that he still considers himself a Nigerian as his parents are from Osun State and he only represents Togo for his career’s sake. Adebayor’s first name Oluwaseyi means ‘God Did This’ which he was given due to his initial difficulty walking as a child. Adebayor currently plays for Crystal Palace in the English Premier League.

Sidney Sam, born to a German mother and Nigerian father, played for German Bundesliga side Bayer Leverkusen and was thought to be in line to represent Nigeria prior to the 2013 Africa Cup of Nations. Former Super Eagles coach Stephen Keshi was reportedly interested in handing the midfielder the chance to represent Nigeria rather than Germany where he was born. Sam had played for the German youth teams but not for the senior national team and was not sure of breaking into the German national team and so was seriously considering Nigeria’s offer. Curiously the midfielder pulled the plug on such plans and never represented Nigeria. Sam went on to play five times for Germany’s senior team and was in a 30-man pre-World Cup squad for Brazil 2014 but did not make the final squad for the eventual champions.

Ross Barkley bears a name you will never think had any Nigerian connection. But did you know that the midfielder has Nigerian roots? Shocked? Well, now you know. Barkley’s father Peter Effanga is Nigerian but the player has since played for the Three Lions because his mother Dianne is English. His parents are divorced which played a huge part in him deciding which country he will represent. After the divorce of his parents, Ross was with his mother and bore her surname and that was how Nigeria seemingly lost him! He was eligible to play for Nigeria but he has now gone into history books as one of those who got away. 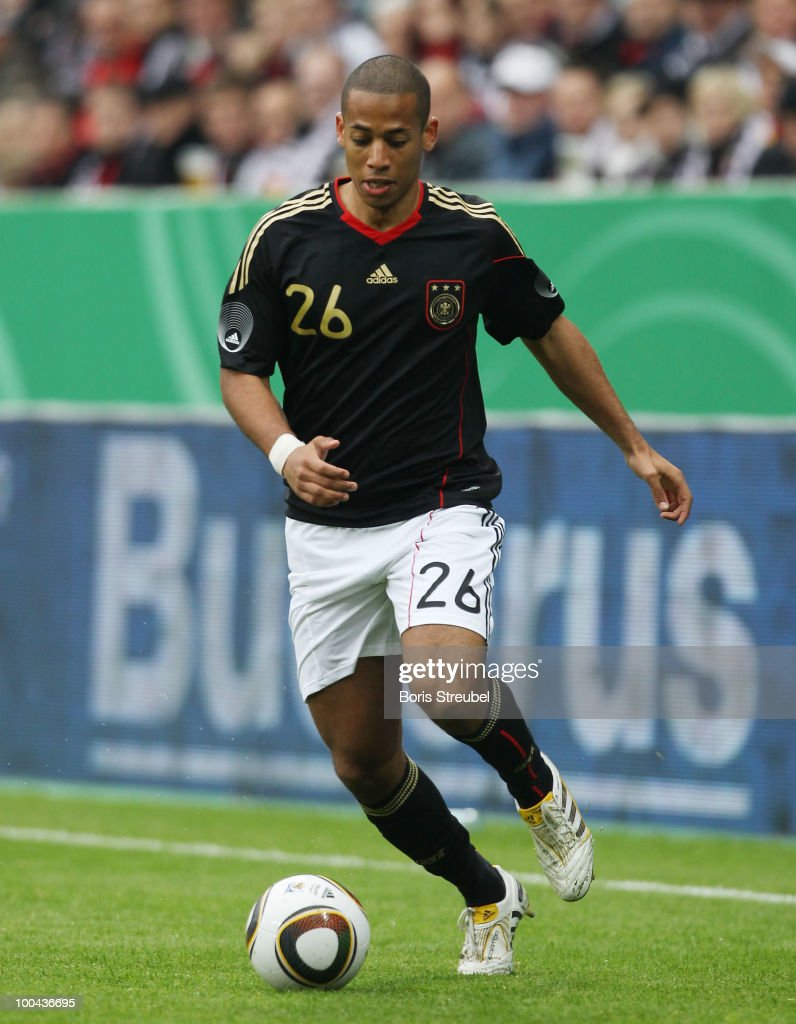 Another Nigerian-born footballer who never got to don the green and white jersey of the Super Eagles is Dennis Aogo. Born to a Nigerian father and a German mother, Aogo who is adept playing as a left-back or defensive midfielder was seen as the ideal choice for the latter position for Nigeria. The versatile player was billed to be part of the Eagles’ squad to the 2010 World Cup in South Africa but prior to the tournament opted out and declared his intention to play for Germany instead. Aogo would later make his debut for Germany in a friendly match against Malta in a 3-0 victory on 13 May 2010, playing 79 minutes, before being replaced by Ghana-born Jérôme Boateng.

West Ham United defender Angelo Ogbonna was born to Nigerian parents who travelled to Italy from Nigeria in 1988. Ogbonna made his debut for Italy in November 2011 in a friendly game against Poland where the Azurri won 2-0. He came on as substitute. He was in the Italian 23-man final squad for UEFA Euro 2012, but never played in any match during the competition. He finished the tournament with a silver medal though.

When Bayern Munich won the 2012/2013 UEFA Champions League on May 25, 2013, David Alaba was seen with the Nigerian and Austrian flags strapped around his waist during the victory parade at the Wembly Stadium Alaba was born in Vienna to a Filipino mother who is a nurse and a Nigerian father who is a DJ and former rapper. The five-time Austrian Player of the Year (2011-2015) whose middle name ‘Olatokunbo’ means ‘Wealth From A Foreign Land’ in Yoruba language was said to be keen on representing Nigeria at youth level. In fact if all had gone well, the left-back would have been in Nigeria’s U-17 squad to the 2007 FIFA U-17 World Cup handled by the late Yemi Tella but he was not considered despite voicing his interest to play for the Golden Eaglets. “I wanted to play for Nigeria but I must confess that there was no formal approach for me. A scout actually discussed that with me. “I was excited because of my dad, he was a fan of (current Super Eagles coach) Sunday Oliseh when Oliseh played for FC Cologne. As a kid, I loved to watch Victor Agali in the jersey of Hansa Rostock,” he told an Austrian news medium. ”I got the information that Nigeria would only consider those who were in the country perhaps because of travelling logistics and that is the end of that.” Nigeria eventually won the U-17 World Cup but nonetheless would have achieved that with the added ‘victory’ of locking up one of the world’s best young players. Two years later, the rejected stone turned the chief cornerstone as Alaba made his debut for the senior Austria national team in a match against France. He then became the youngest player in the history of the Austrian national team.

Alaba has won the Bundesliga title five times as well as the DFB Pokal and the FIFA Club World Cup in 2013. 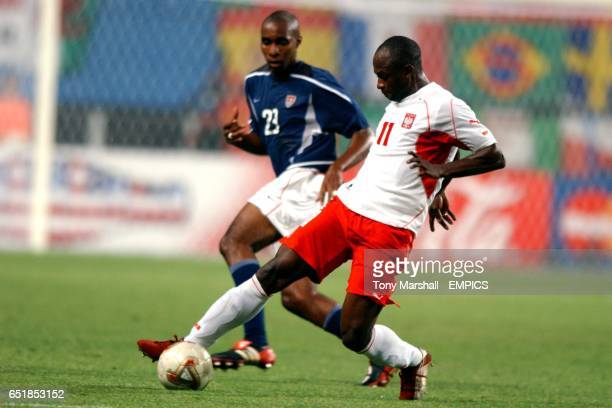 Emmanuel Olisadebe started his professional career with Jasper United of Onitsha. The Olisadebe family are from Ubulu-Ukwu in Delta State. The player was however granted Polish citizenship in 2000 and was subsequently capped by the Polish national team. Olisadebe scored eight goals in ten qualification matches as coach Jerzy Engel’s team reached the 2002 FIFA World Cup, their first since 1986. The ‘Polish Bomber’ had a successful career with his Polish club Polonia Warsaw where in 2000 he won the Ekstraklasa, Ekstraklasa Cup and Polish Super Cup. Olisadebe scored 11 international goals in 25 caps between 2000 and 2004, and participated in the 2002 FIFA World Cup, where he donned the number 11 jersey. Olisadebe whose name means “May God Keep” in the Igbo language of South eastern Nigeria scored Poland’s first goal at the 2002 FIFA World Cup in a 3–1 victory against USA in Daejeon in the last group match, unfortunately for him, Poland failed to progress to the second round of the World Cup.

Tottenham Hotspur hotshot Dele Alli has Nigerian blood running through his veins. Full name, Bamidele Alli, the supremely talented midfield prodigy regretfully plays for England and not Nigeria. His name means “Follow me to my House” in Yoruba and the name is given to a child born outside their community , state, or country. On October 1, 2015, while Nigerians were marking the 55th anniversary of the country, England manager Roy Hodgson on that day was busy hatching a plan to deprive Nigeria of one of its best prospects, Alli. The wily Hodgson on Nigeria’s Independence Day named the midfielder in his team for their final UEFA Euro 2016 qualifying matches against Estonia and Lithuania. The youngster made his debut against Estonia eight days later, coming on as a late substitute for another ‘lost son of Nigeria’ Ross Barkley in a 2-0 win. On 17 November 2015, Alli made his first start for the England senior team, scoring the opening goal from a long range shot to beat Spurs team-mate, goalkeeper Hugo Lloris in a 2-0 win against France at Wembley Stadium in the aftermath of the Paris bombing that shook the world. Alli, injury permitting, is nailed-on to make Roy Hodgson’s squad for Euro 2016 this summer in France.

Oguchi Onyewu Born Oguchialu Chijioke “Gooch” Onyewu on May 13, 1982, Onyewu’s parents moved to the United States from Nigeria to study in Washington, D.C. A US citizen now, Onyenwu made his first senior national team appearance for the US on October 13, 2004, against Panama. Onyewu scored his first international goal in the 2005 Gold Cup in the semifinal against Honduras, and was later named to the tournament Best XI. He is now a free agent after his contract with Charlton Athletic ended.

Stefano Chuka Okaka was born on 9 August, 1989 in Castiglione del Lago, Perugia, in Italy to Nigerian parents who hail from Onitsha, Anambra State. Okaka later obtained Italian citizenship due to his family gaining citizenship status. Okaka joined the Roma youth system in 2004. He is currently an Italian international who plays as a striker for Belgian side Anderlecht. The striker’s uncle, Uche Okaka, confirmed to Completesportsnigeria.com in Lagos that his nephew was indeed keen to play for the Super Eagles despite being a youth international for Italy but his talks with the Nigeria Football Federation did not yield any positive answer. Okaka made his senior debut for the Italian national team on 18 November, 2014. He made his debut as a substitute, replacing Sebastian Giovinco in the second half, and scored the winning goal at Sampdoria’s ground the Stadio Luigi Ferraris.

Gabriel Imuetinyan Agbonlahor was born on 13 October, 1986 to a Nigerian father from Edo State and a Scottish mother and lived all his life at Birmingham. On 19 November, 2008 he made his international debut against Germany. He played for 76 minutes. Since making his debut for England, Agbolanhor has only three caps for the English national team. He made his first appearance in a competitive international on 14 October, 2009, playing 66 minutes in the 3-0 win over Belarus in the last game of qualification for the 2010 World Cup. He was last called up to the squad in November 2011.

The would-he-play, would-he-not play for Nigeria debate regarding Patrick Owomoyela lingered on for quite sometime. The dreadlock-wearing former Borussia Dortmund midfielder has a German mother and a Nigerian father. He won the German Bundesliga titles with Dortmund in the 2010-11 and 2011-12 seasons. Patrick Olukayode Olaiya Owomoleya also played for Lüneburger SK, VfL Osnabrück, SC Paderborn 07, Arminia Bielefeld, SV Werder Bremen and Hamburger SV II. Owomoleya whose middle name, Olukayode means ‘God brings me joy’ in the Yoruba language made his debut for Germany in an Asian tour, playing 90 minutes in a 3-0 win over Japan, on 16 December, 2004, in Yokohama and was part of the German national team at the 2005 FIFA Confederation Cup. Owomoleya’s international career however lasted just two years as he was never invited from 2006 after he was overlooked for a place in the German squad for that year’s World Cup finals which Germany hosted.

Ikechi Anya currently plays international football for Scotland but there is no gainsaying that he is a Nigerian. Scots don’t bear the name “Ikechi” or “Anya”. Anya plays his club football for Watford, so is a team-mate of Super Eagles striker Odion Ighalo. Anya’s parents moved to Scotland in the late 80’s so that his father could obtain his doctorate in Metallurgy. Anya chose to play for Scotland where he grew up but was also eligible to play for Romania, the country of his mother who is an Economist. 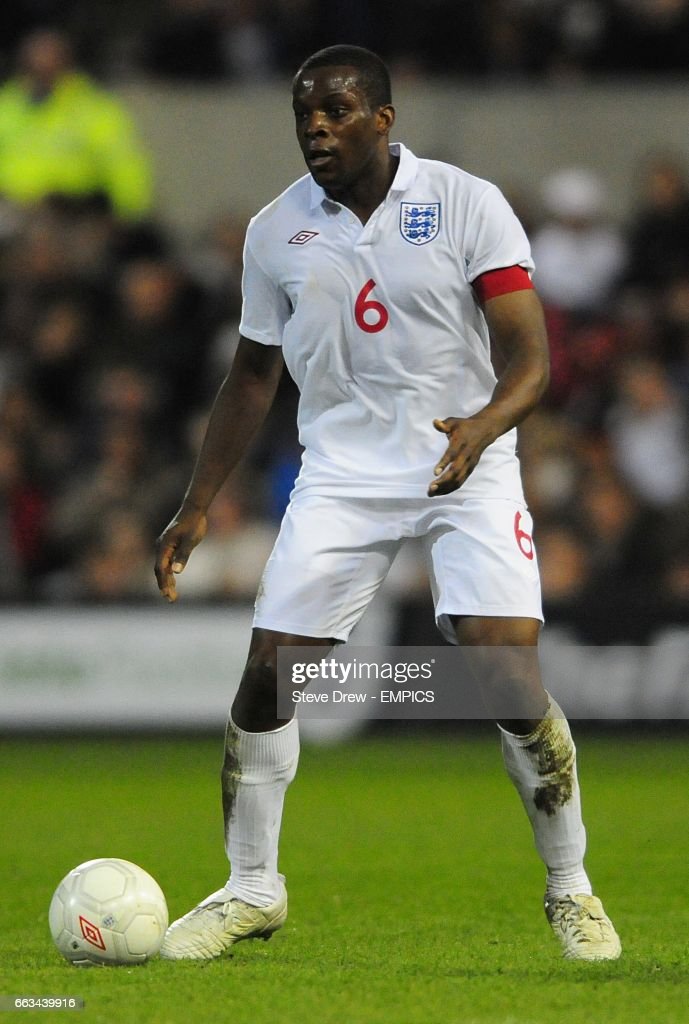 Queens Park Rangers defender Nedum Onuoha received an international call-up to play for Nigeria in March 2007 but rather he chose to wait for a chance to play for England. The defender born in Warri, Delta State before his parents moved to England has since not been capped by the successive managers of the English national team.