Renua Giwa-Amu, a painter and film director who earlier this year accused her pastor dad, Femi Giwa-Amu of sexually abusing her since childhood, has died by suicide on Saturday, December 26.

The 26-year-old lady, who studied at Savannah College of Art & Design in Atlanta, Georgia, United States, took her life shortly after hinted about it on her Instastory and warned family members not mourn her.⠀⠀

Her death was announced on Sunday by a family member named Ozolua O. Giwa-Amu on behalf of the family via his Facebook page. 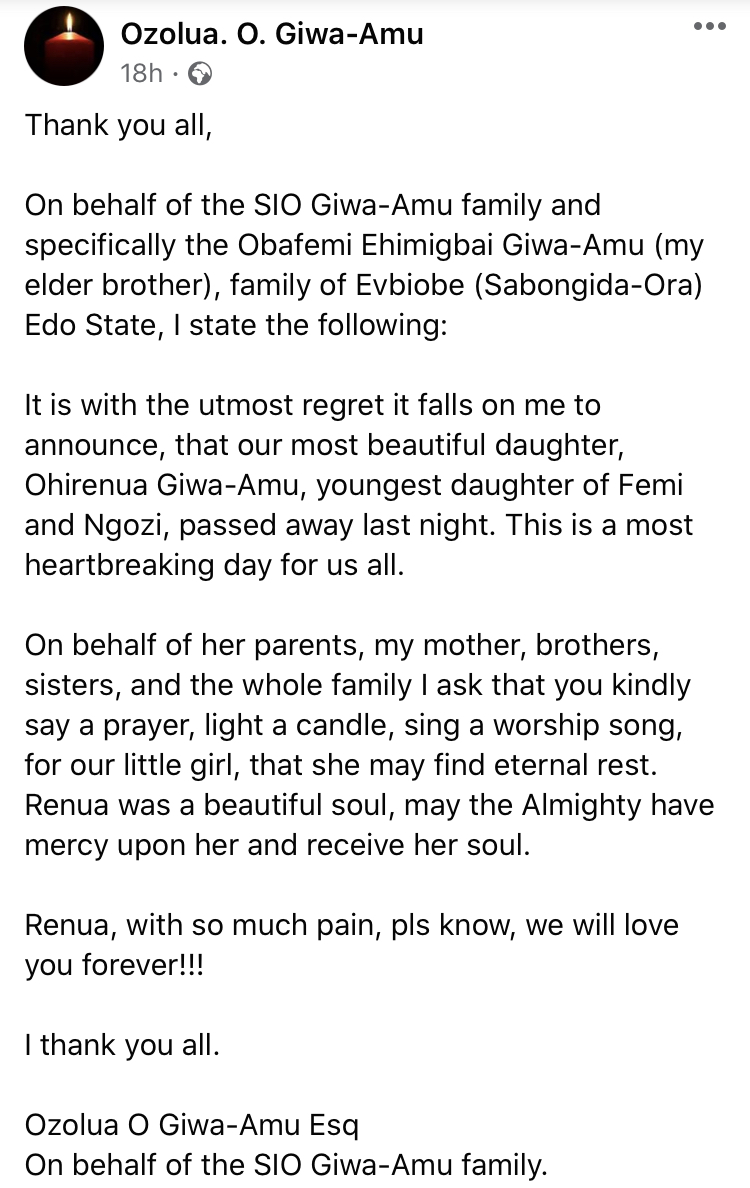 On September 18, Renua called out her father on social media, accusing him of raping her on numerous occasions when she was only a child.

Renua alleged that her father is a pedophile who has molested and sexually abused many young girls that were put under his care.

In several other posts on her Facebook page, the deceased also slammed her mother and other family members for not believing her claims against her father.

In addition, Renua gave hint about her death, stating that no one should share “crocodile tears at my funeral”.

In a terse Facebook post accompanying a video of her conversation with her mother at the time, she wrote;

In case there’s any crocodile tears at my funeral. My “mother” finally called! I’m on my own, as usual, but apparently I’m also doing hard drugs.

In another open letter, Renua bared lurid details of how she battled emotional and psychological trauma after her father allegedly raped her repeatedly many years ago. 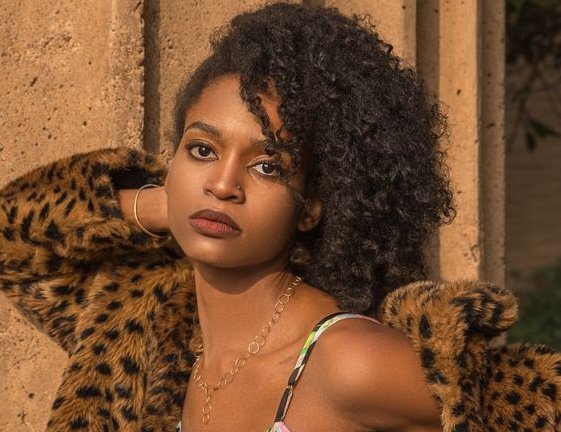 I know that you are a child molester, your numerous victims outnumber you and I remember everything now. All I have to say to you is this: You, your rings of pedophiles, bullies, thieves, hired cronies and family gang can do whatever you like in eternum.

Entire chunks of my memory were once lost and taken from me, entire friendships and interests and hobbies and goals I had just vanished and might still not fully ever come back. Instead I carried around such intense feelings of shame, regret and self-loathing disgust that it consumed me most times.

Good or bad, traumatic or not, those memories of mine that hurt me and triggered me for so long have finally woken me up and reminded me that I promised myself if I survived you, escaped, and somehow found enough sanity to be willing to return home that I would never set foot in Nigeria unless I had publicly acknowledged the fact that you continually raped me as a seven-year-old child until I had a possible prepubescent miscarry and almost died of sepsis. I wasn’t even in Primary 4 yet.

Few days before her death, the film director  shared her harrowing experience in her father’s hands in a length Facebook post titled “A short open letter to a certain Mr. OBAFEMI EHIMIGBAI GIWA-AMU”.

Renua also accused him of defrauding unsuspected persons by selling fake landed properties and absconding with their money.

The deceased shared screenshots of her conversations with alleged victims who reached out to her to share their ordeals. 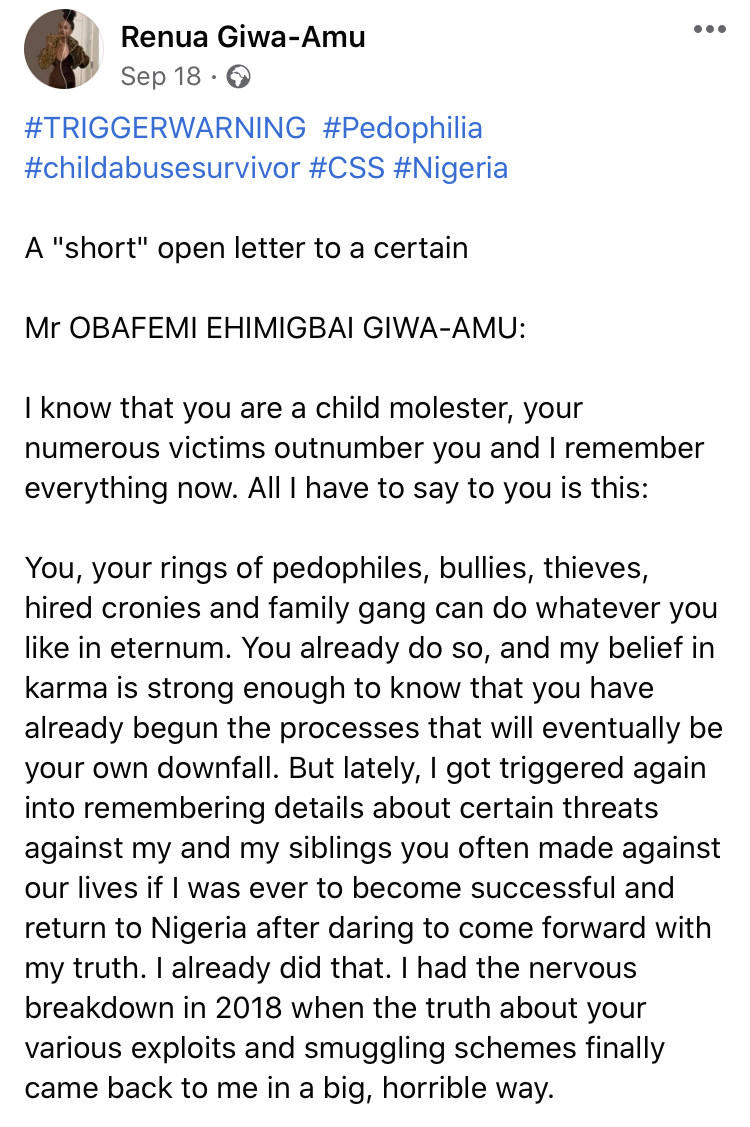 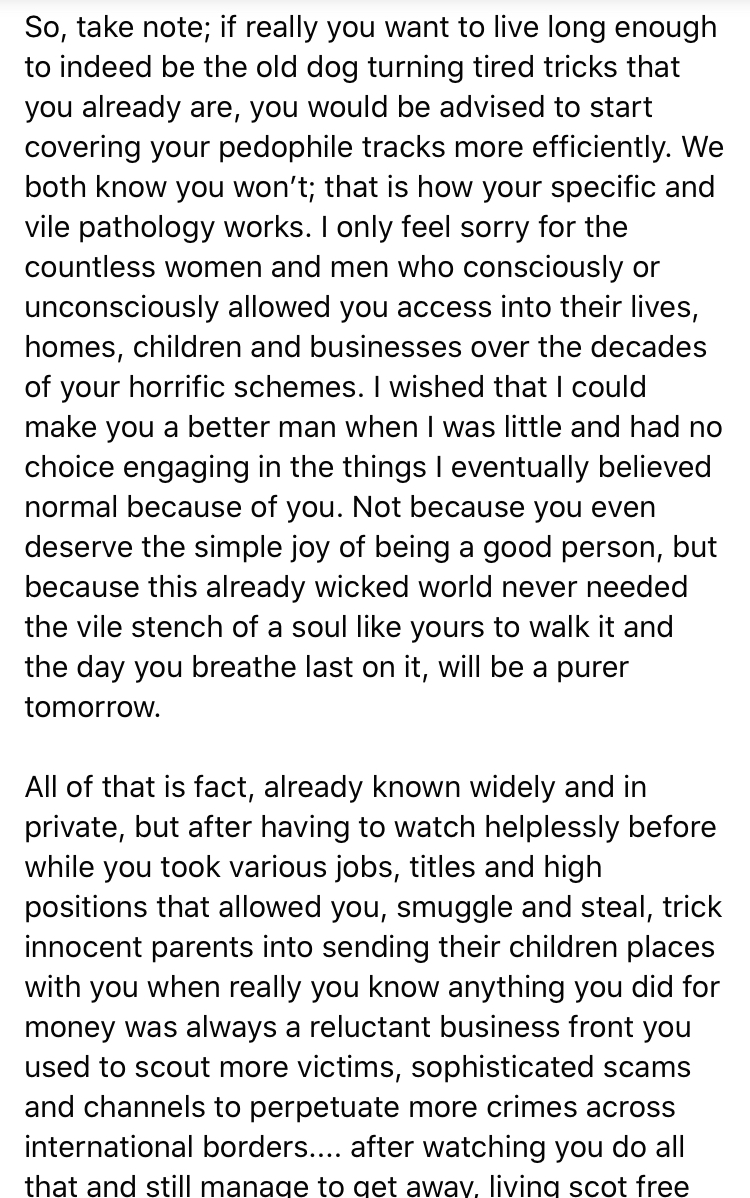 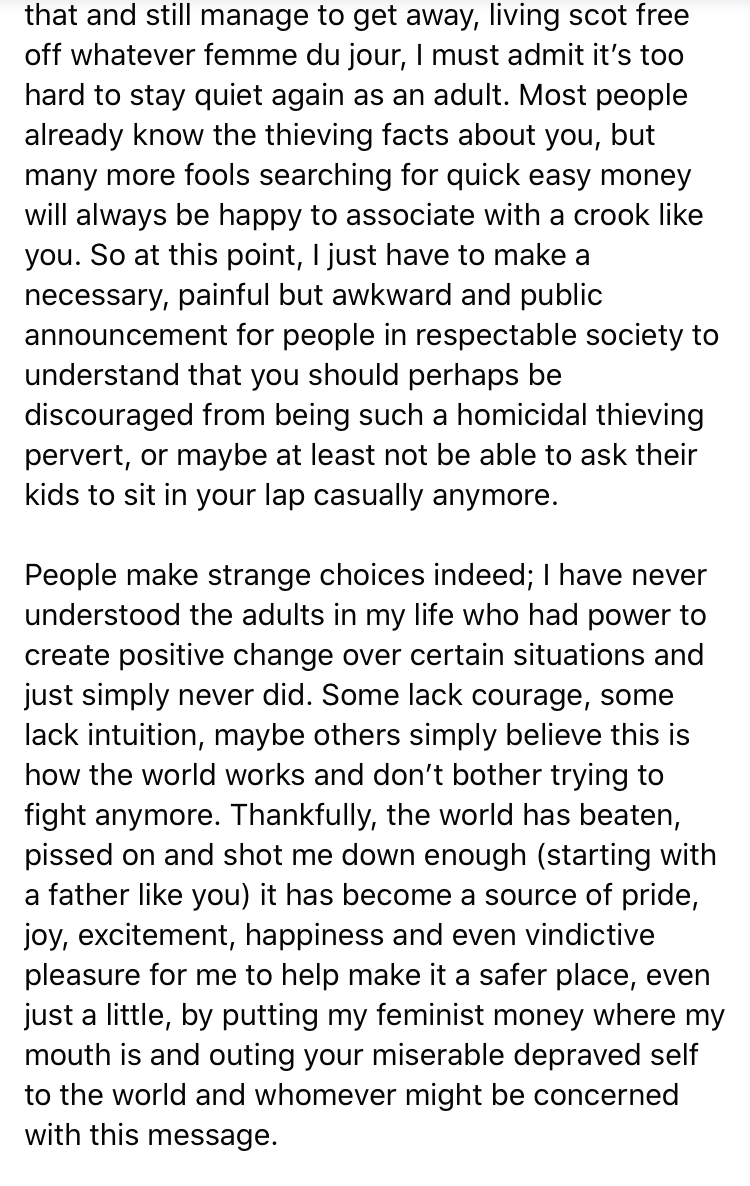 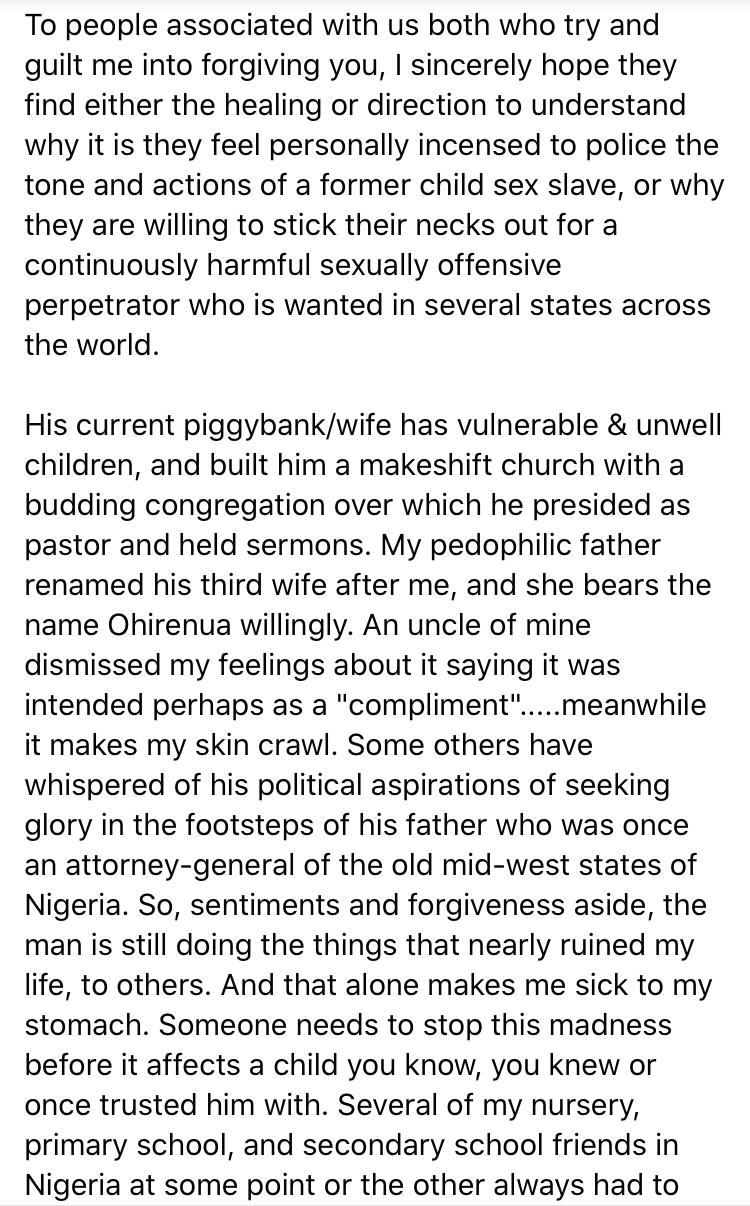 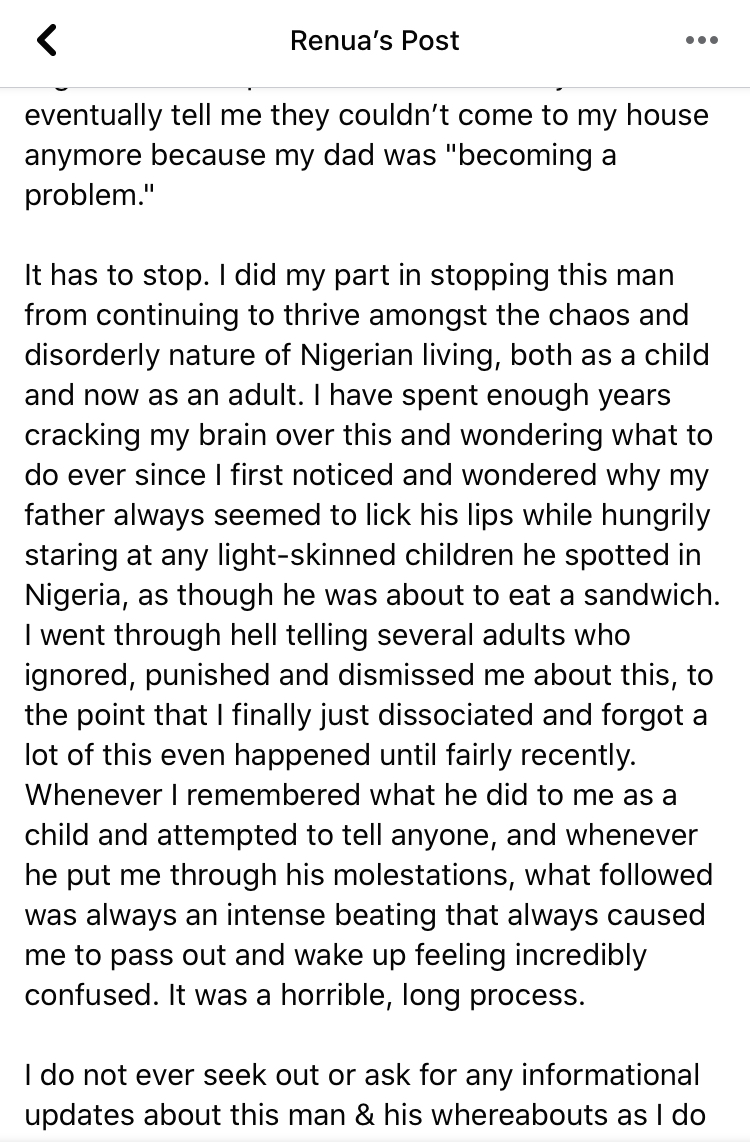 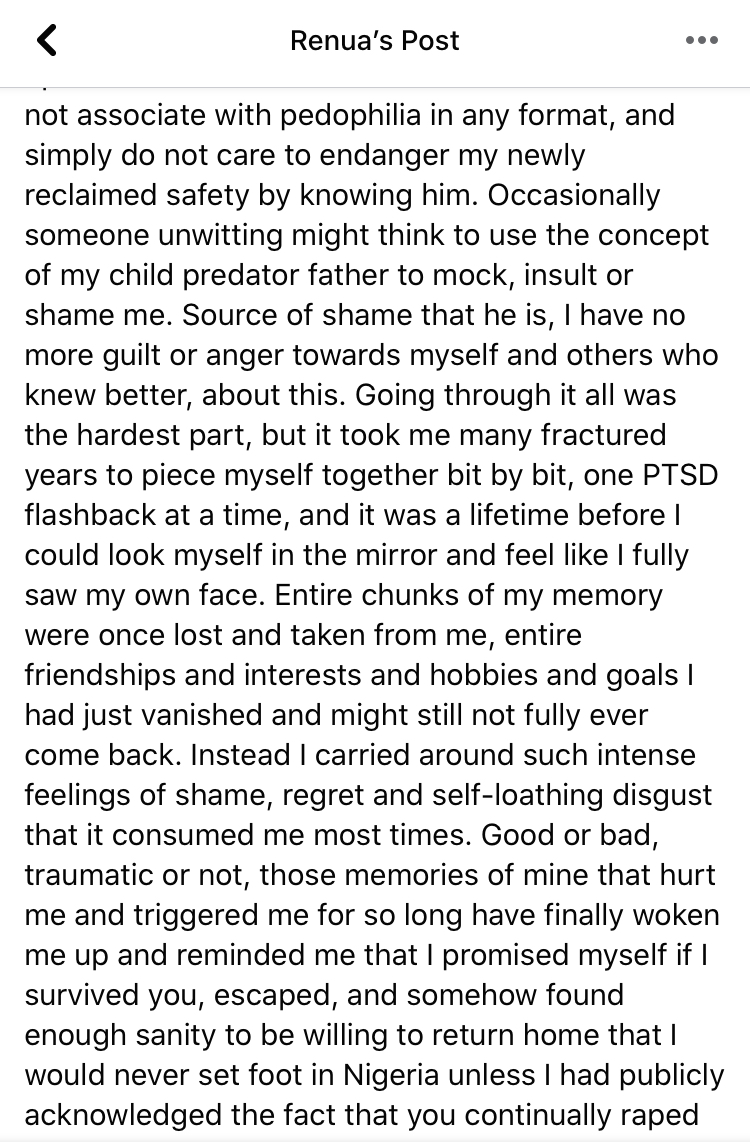 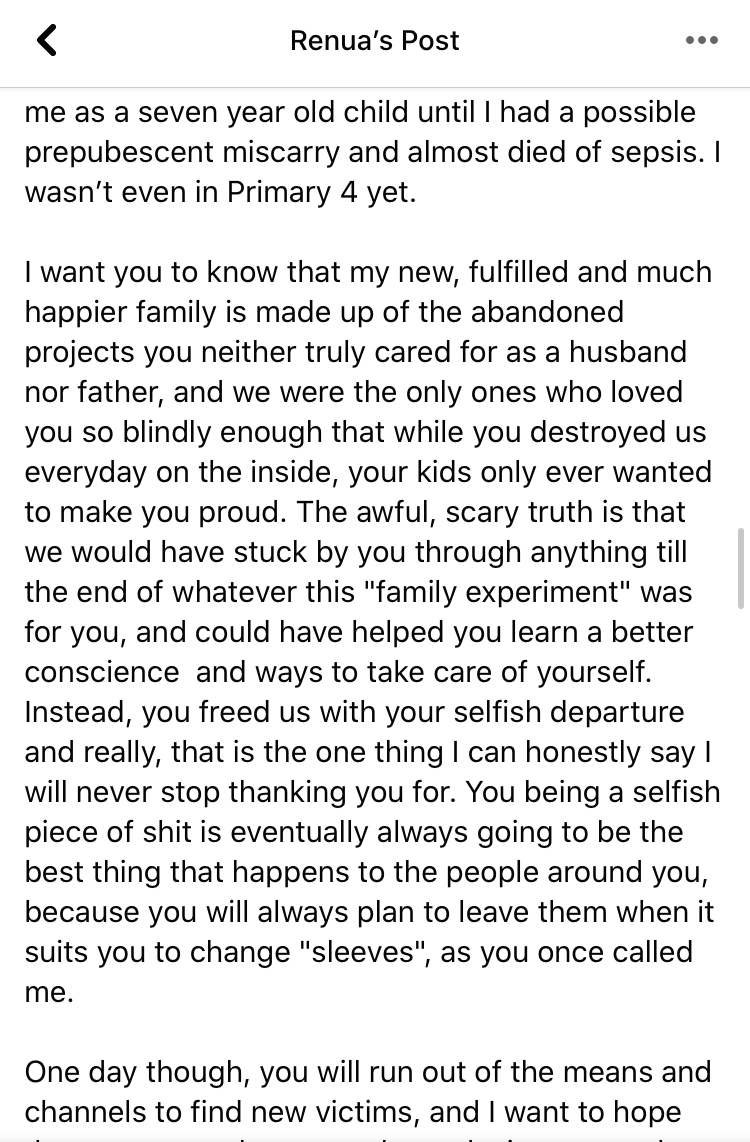 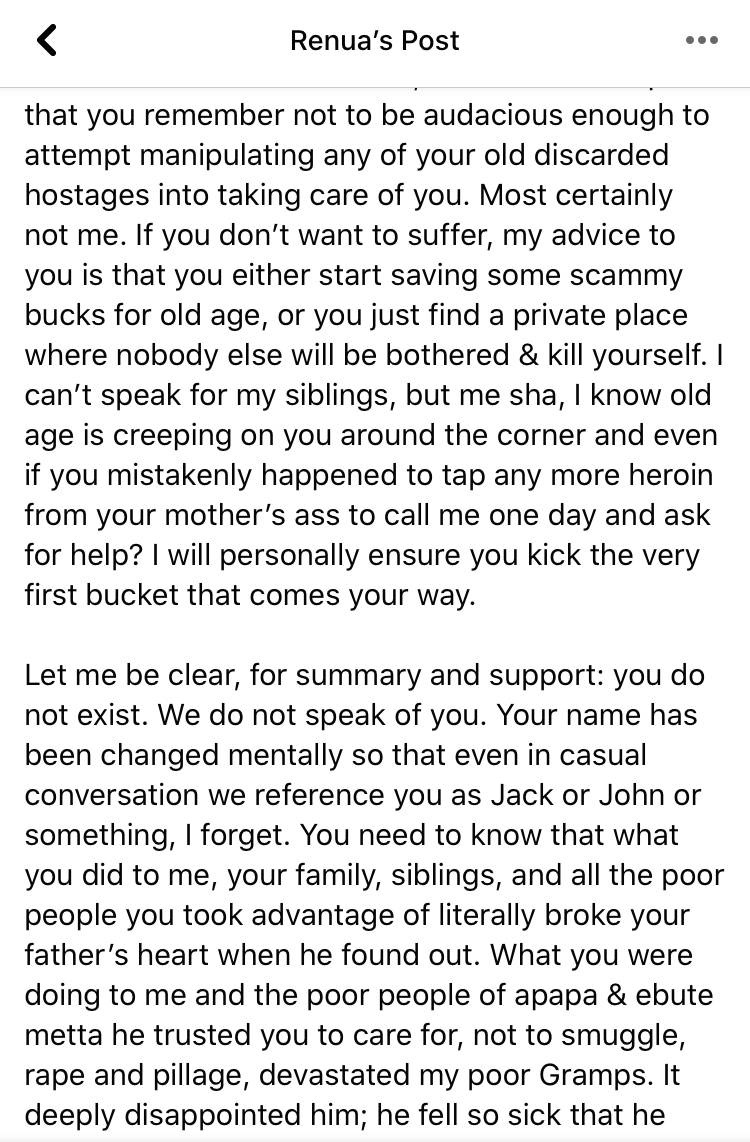 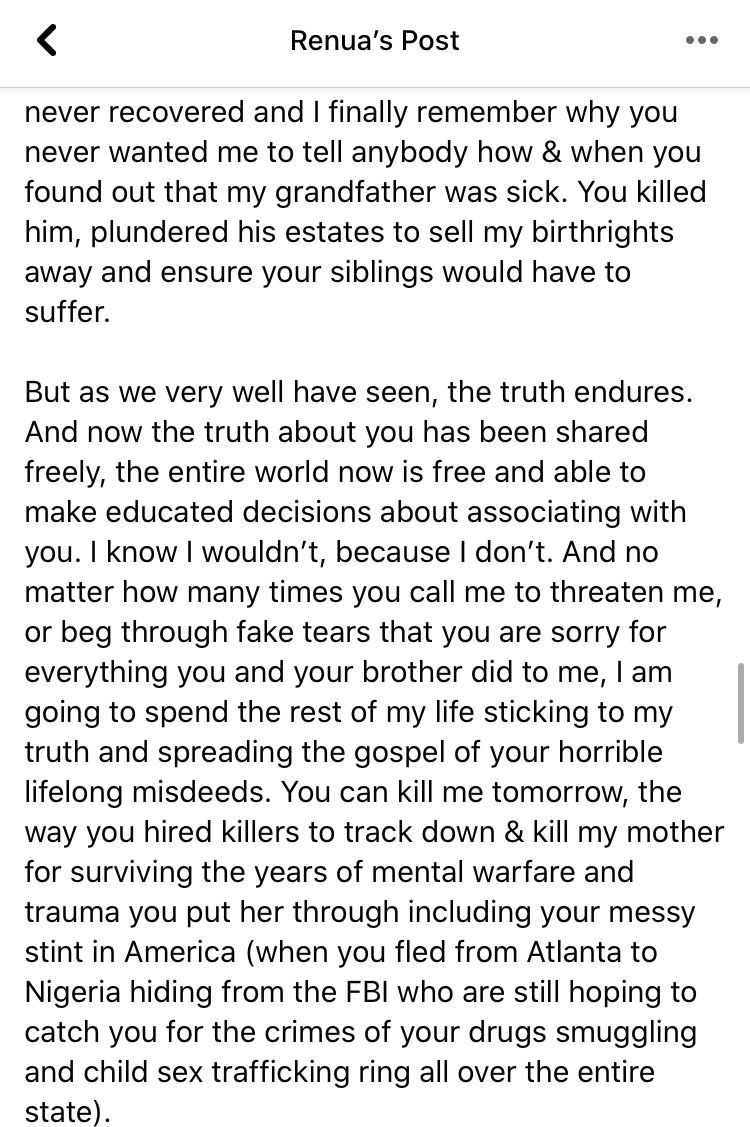 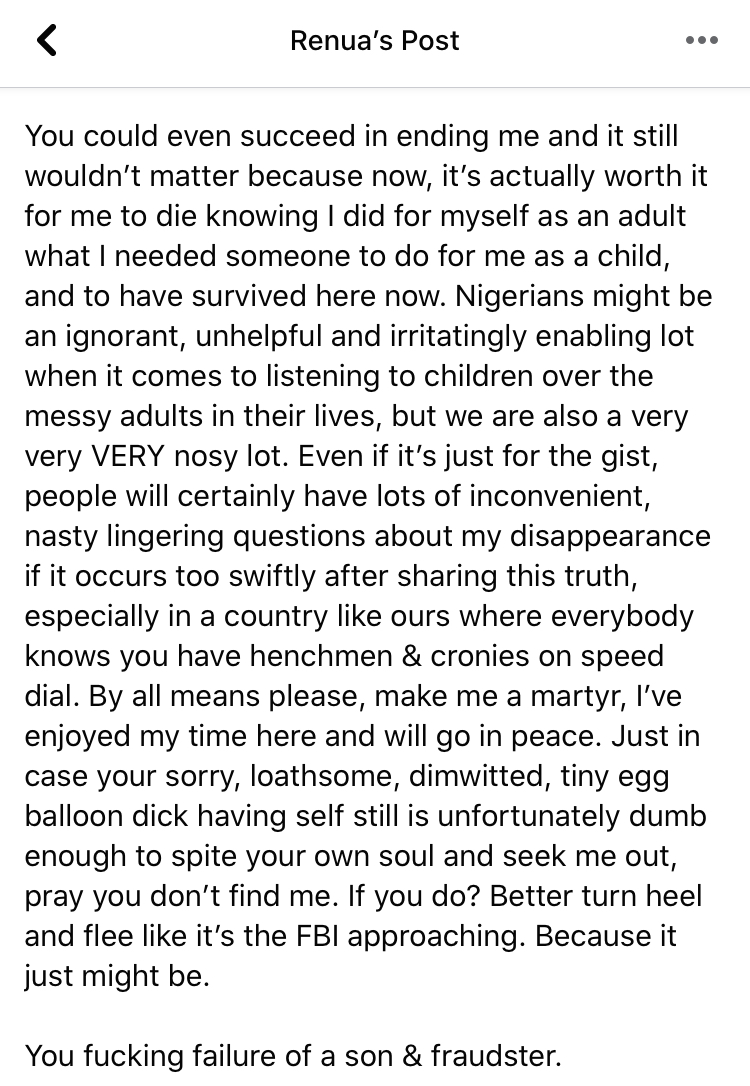 Following the announcement of his daughter’s death by a family member, Giwa-Amu after months of hiatus took to his Facebook page on Sunday to share a photo of a dimly-lit candle in a dark background to mourn his daughter.