Thomas Tuchel masterminded a richly deserved victory in his first London derby as dominant Chelsea beat Tottenham 1-0 to move above them in the Premier League. 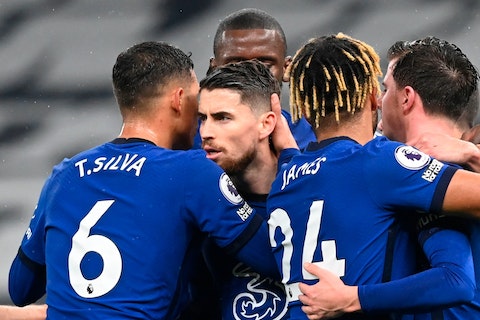 Jose Mourinho could only watch on in the driving rain at Tottenham Hotspur Stadium as his former club bossed lacklustre Spurs, who slipped to a third consecutive defeat.

Jorginho’s first-half penalty made it seven points from three matches without conceding a goal for Chelsea under Tuchel, lifting them into sixth place.

Toothless Tottenham were outclassed and fortunate not to suffer a more emphatic loss as they slipped down to eighth following another lacklustre performance.

Timo Werner almost got Chelsea off to a dream start when he nodded a long ball from Cesar Azpilicueta just wide in the first minute.

The Blues knocked the ball about with a swagger and deservedly took the lead 24 minutes in, Jorginho finding the bottom-right corner of Hugo Lloris’ net from the spot after Eric Dier had tripped the lively Werner.

Andreas Christensen replaced the injured Thiago Silva as Tuchel’s side continued to dominate, although Serge Aurier wasted a chance to equalise late in the first half when he headed Son Heung-min’s free-kick wide.

Spurs showed more urgency after the break, pressing Chelsea higher up the pitch, albeit Callum Hudson-Odoi could have doubled the lead when he drilled wide of the far post.

Aurier produced a brilliant last-ditch tackle to prevent Werner from ending his Premier League goal drought as the Germany striker was about to pull the trigger after being set up by Mason Mount.

Lloris bravely punched away a dangerous cross with Christian Pulisic waiting to pounce and Mateo Kovacic poked a shot wide with Chelsea firmly in command.

The excellent Mount was denied by a fine reflex save by Lloris as Spurs were opened up all too easily again before Edouard Mendy was finally called into action, palming away Erik Lamela’s shot with just over 10 minutes to go.

Carlos Vinicius should have made Chelsea pay for their profligacy, but he headed wide from close range late in his first league start as Gareth Bale was an unused substitute for the hosts.